The following is a list of games that were either misreported, misidentified, or completely made up.

The Legend of Zelda III: The Triforce Saga[]

On October 15, 2005, a mysterious Ebay seller (known only as Richard Vialoux) posted a listing for a supposed prototype of a third Zelda title for the NES[1]. To increase the game's legitimacy, the seller posted a photo of the game playing on an NES. On October 22, a user known only as "Knight 7" bought the game for almost $3000[2].

Two days later, Richard contacted the gaming site Joystiq and claimed Knight 7 may have been connected to the now-defunct game company, Silicon Knights. As a result of this, the CEO and founder of Silicon Knights, Dennis Dyack, contacted Joystiq to inform them that Silicon Knights had nothing to do with the purchase[3].

As the third Zelda game, The Legend of Zelda: A Link to the Past, was planned for the SNES in 1989 (a year before the copyright date on the Zelda III cart), this game is likely a hoax.

A hint published in the July 1993 issue of SWAT Pro references an NES version of Magic Sword, though the screenshot clearly depicts the SNES version.

Reported for the NES by the magazine GamePro, which later released a correction in July 1992 informing readers that it was actually for the Sega Genesis[4].

Reported for the NES by the magazine Electronic Gaming Monthly[5], which also misnamed Super Mario Bros. 2 as Super Mario World 2. The screenshots, however, clearly show Super Mario All-Stars for the SNES.

On February 9, 2016, a user by the name of ItsJokerTime posted to NintendoAge's "Price Check" section about a Yeah Yeah Beebiss I prototype[6] given to him by his father. He eventually posted pictures of the cartridge, indicating that it was from the 1987 Consumer Electronics Show. However, when he tried to play the cartridge on his Retro Duo, the game displayed as a garbled wall of pixels.

The game was suspected to be a fake from the start, which was supported by the label being in mint condition despite the cartridge being old and discolored. This assumption was eventually proven due to the fact that, despite supposedly being from 1987, the game was on a three-screw cartridge, a design that didn't exist until 1988.

Following requests to open the cartridge and take pictures of the board itself, ItsJokerTime ordered a 3.8mm screwdriver bit, which is necessary to open cartridges using security screws. However, after several weeks, the bit never arrived, and ItsJokerTime ceased posting to the thread. 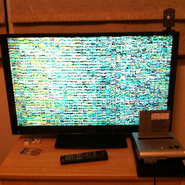 The cartridge being tested on a Retro Duo.

Allegedly, Nintendo had originally planned Super Mario 64 for the SNES, using the Super FX chip to simulate 3D graphics. However, this was likely a misunderstanding of a statement made by Shiguru Miyamoto during an interview, in which he stated that he had the idea of making a 3D Mario game during Star Fox's development. Additionally, Dylan Cuthbert, who contributed to the development of the Super FX, explained that "Super Mario FX" was actually the codename for the Super FX itself[7].

Community content is available under CC-BY-SA unless otherwise noted.
Advertisement